I recently found myself longing for male friends to act dominant over me. Imagining close male friends putting their arms over my shoulders and jostling me a bit, or squeezing my shoulders a bit roughly as they come up to talk to me felt good. Actions that clearly convey ‘I’m in charge here and I think you’ll like it’.

I was surprised at first. After all, aren’t showy displays of dominance bad? I don’t think of myself as particularly submissive either.

But my longing started to make more sense when I thought about my high school cross country coach.

When I was in high school, I was on the cross country team. Every day, practice would start with everyone slowly gathering in the quad; talking and starting to stretch. As we gathered, Coach would walk around and stop to talk to individual students. As he came up to you, he would often put his hand on your shoulder or sidle up alongside you and squeeze the nape of your neck. He would ask you - How are you? How did the long run feel yesterday? What are you aiming for at the meet? You’d tell him, and he would tell you what he thought was good - Just shoot to have a good final kick; don’t let anyone pass you.

And it felt really good for him to talk to you like that. At least it did for me.

You see something a bit like this among dogs. 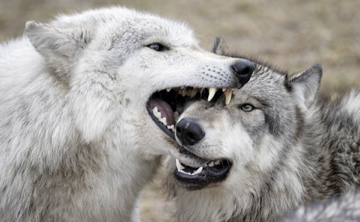 Dogs often roll over to expose their bellies to their owners as a sign of submission. They’ll look at you expectantly until you accept it by rubbing their belly. More dominant members of a wolf pack will muzzle grab less dominant members to reinforce the relationship between them. Young puppies will stick their head in your mouth if you give them a chance.

Something feels really nice about being on the submissive end of this kind of clear status play. Not just from my male friends either, but my female friends too.

You might think I only want this from my ‘cool kids’ friends, but it turns out not. I also want it from friends who I normally think of as generally being less able than me. Even if they’re less able than me, they can and will notice things I wouldn’t have noticed and make plans I wouldn’t have made. I’m not longing for a clear status hierarchy, I’m longing for my friends to notice opportunities to boss me around. Occasions when things would be better if they were in charge.

I want you to come up to me, put your arm around me, ask me how I am and start telling me about the idea you’ve got. Show me you ought to be in charge, because right now I’m a little lost and you’re not.

I don’t know if a lot of other rationalists feel this way, but I wish they would.